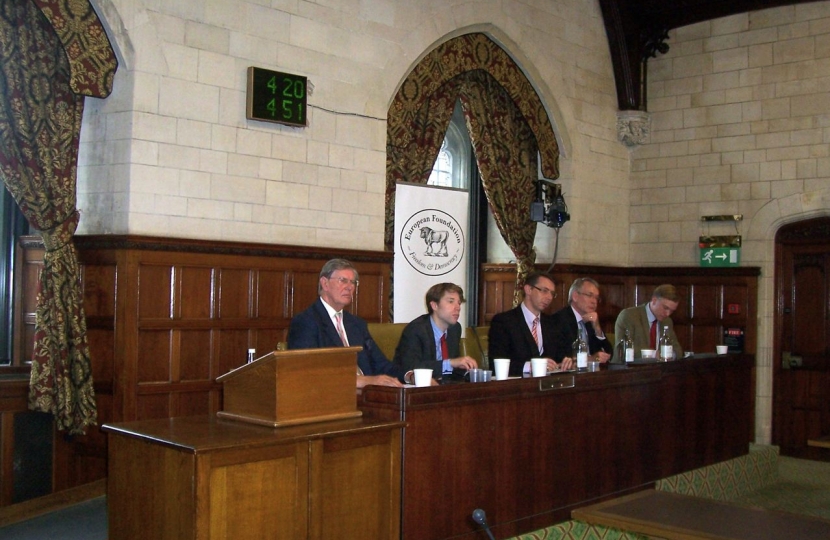 On Monday 5 September, Bill Cash published a pamphlet called “It’s the EU, Stupid”. This was launched at a European reform debate in Westminster Hall (Grand Committee Room) between leading Eurosceptics and Europhiles.

The pamphlet is a grand summing up of the current Eurorealist position. It states that “the United Kingdom, in its own vital national interests, must take the lead in renegotiating all the European Treaties, combining with other Member States who reject the need for European economic government and fiscal union for the Eurozone. We must return to an EFTA-plus arrangement, so that we regain our democracy and economic stability and, with it, the ability to deliver policies for which the British people have voted or leave the European Union altogether.”

Bill Cash argues that the “remorseless logic” of fiscal union is that it will generate instability for the UK, the EU and the Eurozone. There will be more bailouts. The German conditions will not be complied with. There will be implosion, just as the existing Treaties themselves have not worked.

The launch received widespread media coverage - as did an exchange between Mr Cash and the Prime Minister at the Liaison Committee. Mr Cash put it to Mr Cameron that he was "rather an enthusiast for the notion of keeping Europe together", drawing the reply "I'm a very practical Eurosceptic".

The pamphlet can be downloaded at